Once again, we had major events and meetings pertaining to the biblical land of Israel and record-setting corresponding catastrophes in the United States. The following are highlights of the December 8–10 activities and a summary of the catastrophes. We need to continue to pray for those greatly impacted by these massive storms.

Below this section is the timeline for last week’s U.S.-Israel activity and the record tornado outbreak and additional details on what took place.

Kushner was in Abu Dhabi, UAE, on December 8. Jerusalem Post: A memorandum of understanding resolving to build upon the foundation of the Abraham Accords was overseen by former US presidential advisor Jared Kushner and signed by representatives from the Abraham Accords Peace Institute (AAPI) and the Sharaka NGO in Abu Dhabi on Wednesday, January 8.

Gantz was at the State Department on December 9: Jerusalem Post: When Defense Minister Benny Gantz was in Washington last week, December 8-9 to implore the Americans to take a tougher stance against the Iranian nuclear threat, US Secretary of State Antony Blinken insisted they devote equal time to discussing settlements as they did to Iran, which Israeli diplomatic sources found baffling in January 8, 2021. Blinken told Gantz that the Israeli government’s settlement activity is “destroying the chance of a two-state solution.”

Trump criticizes Netanyahu for not being serious about peace, December 10: On Friday, my friend Barak Ravid of Israel wrote an article about his upcoming book. Barak wrote, “Trump repeatedly criticized Netanyahu during two interviews for my book, “Trump’s Peace: The Abraham Accords and the Reshaping of the Middle East.” The final straw for Trump was when Netanyahu congratulated President-elect Biden for his election victory while Trump was still disputing the result.”

Record tornado outbreak December 10, 2021: Historical supercell (WHNT). One notable supercell that formed produced damage through Arkansas, Missouri, Tennessee and Kentucky. This storm traveled nearly 250 miles, showing a nearly persistent rotation. This will possibly be a historical storm because there is a good chance it produced a tornado that persisted longer than the historic and unprecedented Tri-State Tornado of March 18, 1925. On that date, a tornado traveled 219 miles through Missouri, Illinois and Indiana.

Blinken insisted on the devotion of equal time to Iran and settlements in his meeting with Gantz.

The deadly tornado outbreak of Dec. 10 spanned multiple states in the central and southern United States and left hundreds of miles of devastation. With tornado outbreaks of this caliber typically occurring between February and June, many are left to wonder how such a devastating outbreak could occur in December.

"We talk about these types of events with numerous tornadoes … several violent [tornadoes] with what appears to be violent EF4 or maybe EF5 tornadoes. Those typically occur in the springtime in the February through June time frame in most cases," said Depodwin.

One notable supercell that formed produced damage through Arkansas, Missouri, Tennessee, and Kentucky. This storm traveled nearly 250 miles showing a nearly persistent rotation. This will possibly be a historical storm because there is a good chance it produced a tornado that persisted longer than the historic and unprecedented Tri-State Tornado of March 18, 1925. On that date, a tornado traveled 219 miles through Missouri, Illinois, and Indiana.

On the evening of Friday, December 10, 2021, a potent storm system moving across the central United States resulted in widespread severe weather across the region, including a significant long track tornado.

** Preliminary surveys ** suggest this tornado began in northeast Arkansas, crossing the Missouri Bootheel, northwest Tennessee, and across western Kentucky, resulting in significant destruction to portions of the region. Preliminary findings indicate high end EF4 damage in western Kentucky. While the tornado was on the ground for 128 miles within WFO Paducah's forecast area, the total path length was at least 163.5 miles including the damage into Breckinridge County, KY within WFO Louisville's coverage area.

A monstrous tornado, carving a track that could rival the longest on record, ripped across the middle of the U.S

Israel consulted with US before covert strikes on Iran missile, nuke sites — report

Here is a snapshot displaying times for when the Dec 10th Tornado moved through each county in western KY, along with when a Tornado Warning was issued for each of these counties. It travelled 128 miles across our forecast area between 8:56 and 11:10 PM. 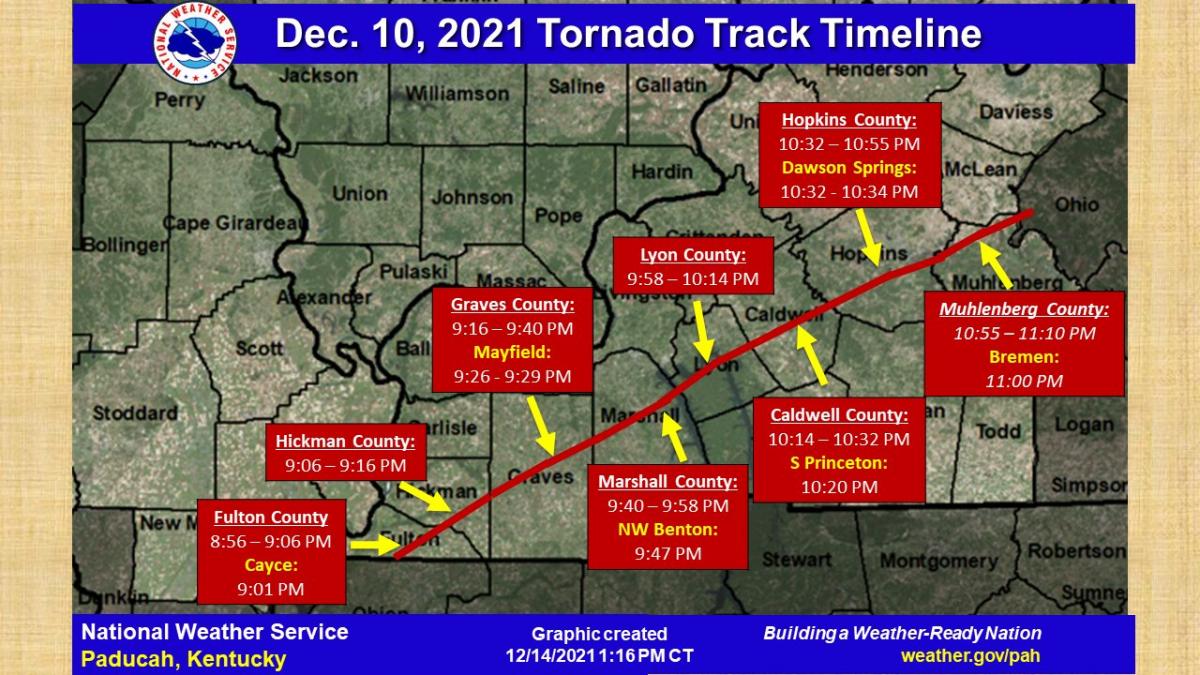 The Abraham Accords Peace Institute (AAPI) convened its inaugural “Trade and Investment Forum” last week at the Emirates Palace hotel in Abu Dhabi, led by chairman Jared Kushner and executive director Rob Greenway, under the auspices of Sheikh Tahnoun bin Zayed Al Nahyan, national security adviser of the United Arab Emirates. The forum served as a catalyst for accelerating and deepening the economic ties between the four countries that have signed the Abraham Accords: the UAE, Bahrain, Sudan and Morocco.

The event brought together high-ranking officials, investment bodies, business leaders and representatives from Israel, the UAE, Israel, Bahrain, Morocco, Egypt and Jordan to review progress in building economic ties over the past year, prioritize solutions for obstacles to optimal trade and advance decisions regarding strategic initiatives for the coming year.

AAPI presented detailed economic projections and key performance indicators for advancing multilateral and bilateral trade, investment and tourism by 2025, developed with the RAND Corporation in collaboration with member nations of the accords.

For the full article: JNS

Donald Trump and Benjamin Netanyahu were the closest of political allies during the four years they overlapped in office, at least in public. Not anymore. "I haven’t spoken to him since," Trump said of the former Israeli prime minister. "F**k him."

What he's saying: Trump repeatedly criticized Netanyahu during two interviews for my book, “Trump’s Peace: The Abraham Accords and the Reshaping of the Middle East." The final straw for Trump was when Netanyahu congratulated President-elect Biden for his election victory while Trump was still disputing the result.

Trump: I thought Israelis would do anything for peace, but found that not to be true

In newly released interview excerpts Saturday, former United States president Donald Trump offered more startlingly frank views on Israel’s leadership during his time in office, a day after he was quoted in an astounding assault on ex-premier Benjamin Netanyahu.

In the latest taped comments broadcast by Channel 12, Trump said he believed Netanyahu “did not want to make peace. Never did”; claimed he prevented the Israeli leader from annexing West Bank land (“I got angry and I stopped it”); offered his favorable opinion on Defense Minister Benny Gantz (“I think [he] wanted to make a deal… if he won, I think it would be a lot easier”); and his evolving view on the Israel-Palestinian conflict (“I [had] thought the Palestinians were impossible, and the Israelis would do anything to make peace and a deal. I found that not to be true”).

For the rest of the article: Times of Israel

Israeli annexation of West Bank settlements was scuttled within 24-hours of its July 1 deadline in 2020, Barak Ravid revealed in his new book interviewing Donald Trump.

How Trump helped Netanyahu by cursing him - analysis

Former US president Donald Trump cursed Benjamin Netanyahu in an interview, but that is not the greatest impact from what was said.

‘What the h-ll was that?’: Netanyahu annexation announcement caught Trump off guard

Book tells of Jared Kushner’s fury at Israeli PM’s unexpected declaration, an exasperated Trump snapping, ‘If you want to do it, do it,’ and Netanyahu’s cold feet before UAE deal

For the article and extensive details: Times of Israel